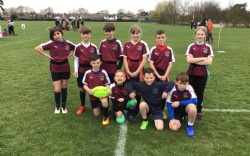 We are delighted with our pupils' sporting achievements.

We have had a great many sporting successes this term. In January, six of our Y6 children went to a Dodgeball tournament where they were crowned area champions. This was followed up by another area win, this time the U10 Boys football. The boys dominated every game, but due to ending 3 games 0-0 they had to go through three penalty shoot-outs! The boys held their nerve and were victorious in each shoot out (which gives them a better success rate than the England team!) A week after the football win, 10 children from Years 5 and 6 went to a tag rugby tournament. We had to make some late changes to the team due to illness but the children all pulled together and made it all the way to the final, where they finished second. Several of the referees remarked on the behaviour of the children and how fairly they played the game.

Last term, our hockey team qualified for the county final, which was played this week. They travelled to Ipswich for the competition, where they were pitted against the best schools from across the county. They made it through the group stages with two wins and a draw, where they then went on to win their quarter final. In the semi-final, they came up against the reigning champions and lost 3-1, but they went on to win the play-off meaning they finished 3rd. This is an incredible achievement as 120 schools took part in the competition from the start!

Ian Jackson, the Forest Heath Sports Partnership manager, has invited a team of Y3 and 4s to play a friendly game of tag rugby against Cheveley next term. Mr Shaw, Miss Williams and Mr Turner are keeping their eyes peeled for children who can be selected to take part in this special event.